Drop us a line sometimes and let us know what you think.  Did you miss our previous Short T’s?  Don’t worry – Check out the Short T’s Archive!

Read the transcribed text for "The Kings's Throne" audio.

What you are looking at here is a throne. It’s a throne for the king of the Yoruba people of Nigeria. The Yoruba make up a major group of people in that Western African nation, which is a pretty big country. It has the Yoruba, the Ibo, and up north, they have the Hausa-speaking people. But this throne is designed to reflect the power of the king. Now, you will see strings of beads that come down, there used to be more of them. This is a pretty old piece, and it’s been shifted and shown in different places, so it’s lost some of its beadwork. This belongs to one of the members of the board of the African Art Museum of Maryland, Mr. Al Engelmen, and so it’s on extended loan to us. There are several strings of beads that are missing, but the strings of beads were there to further not allow you to look at the face of the king. In other words, the deference that you showed to the king, when you approached him to give him something or to show at his request, you did not look at the face of the king. He was the king, so you didn’t look at his face.

The beads are just a suggestion of the obscurity of his face that you did not look at the face of the king. He was the king. At the same time his feet would never to touch the ground and hence, the cushion that you see there that his feet rest on is an indication of his power that his feet were to never to touch the ground. We’ve had some elementary school children asked me, Ms. Ligon if his feet were to never to touch the ground, how did he go to the bathroom? Well, I had to explain to the children I have not watched the king go to the bathroom, and I have to assume that he would walk toward it like everybody else. That would be one of his private moments when he was on his way to a restroom. If he were anyplace else, if he was maybe entertaining the public, you would not see him walk in any more than you would see him walk out. He would be carried in or carried out. But most often, if you were fortunate enough to have an audience with king, he would be seated on his throne as you approach.

These are all glass beads you can see it’s very colorful. All glass beads, these are all hand done.  Beads of this type used to be used for currency. So if you can imagine that a handful of these would be worth a whole lot of money in the Western world, then you can imagine the value or the reflection of the value that these beads are showing in the king. The king is very rich, is also very rich in culture. He’s also very powerful, and the beads just reflect all of that, along with his feet not touching the ground and his face in somewhat obscurity. Again, sitting on his throne. 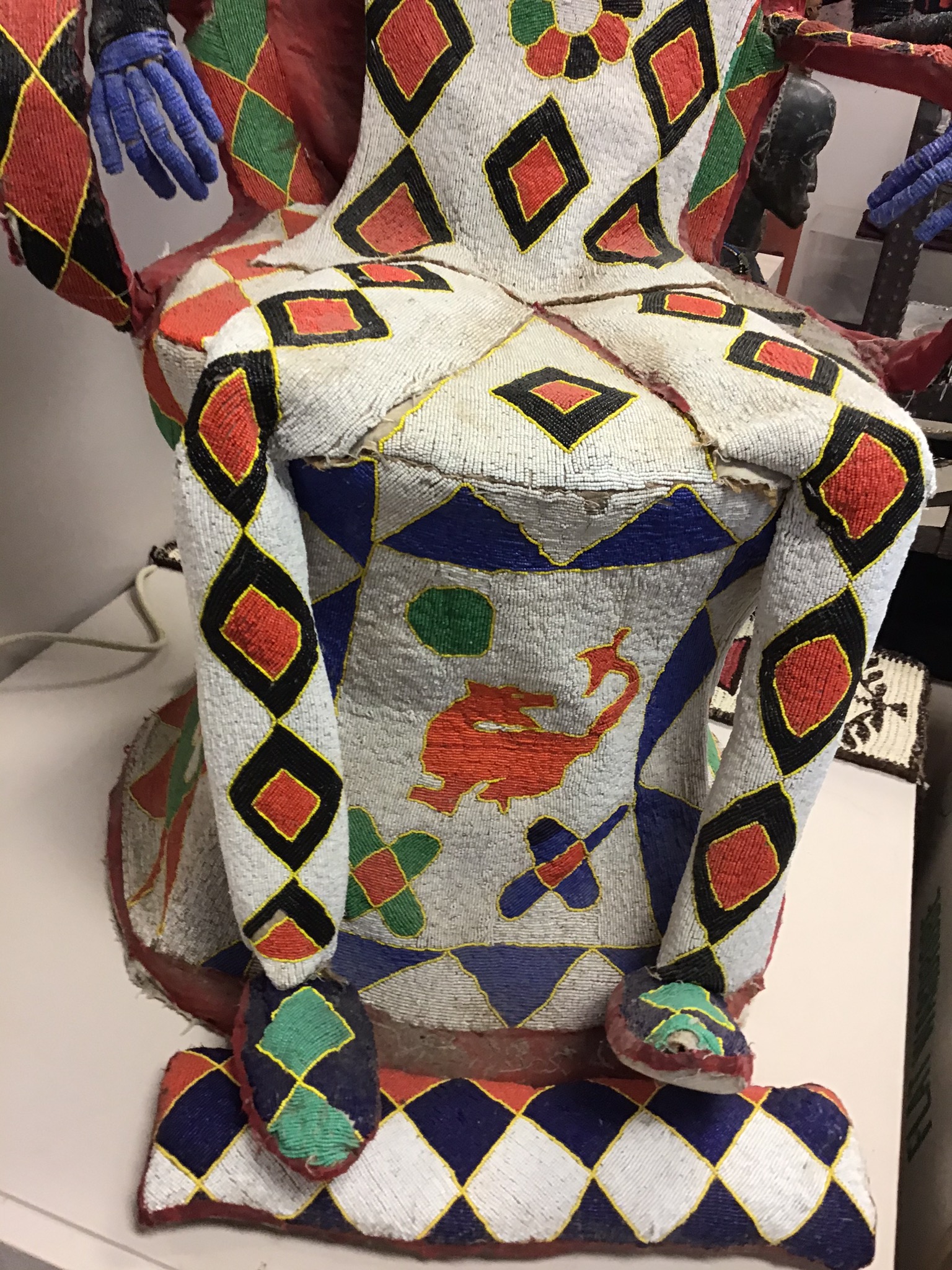 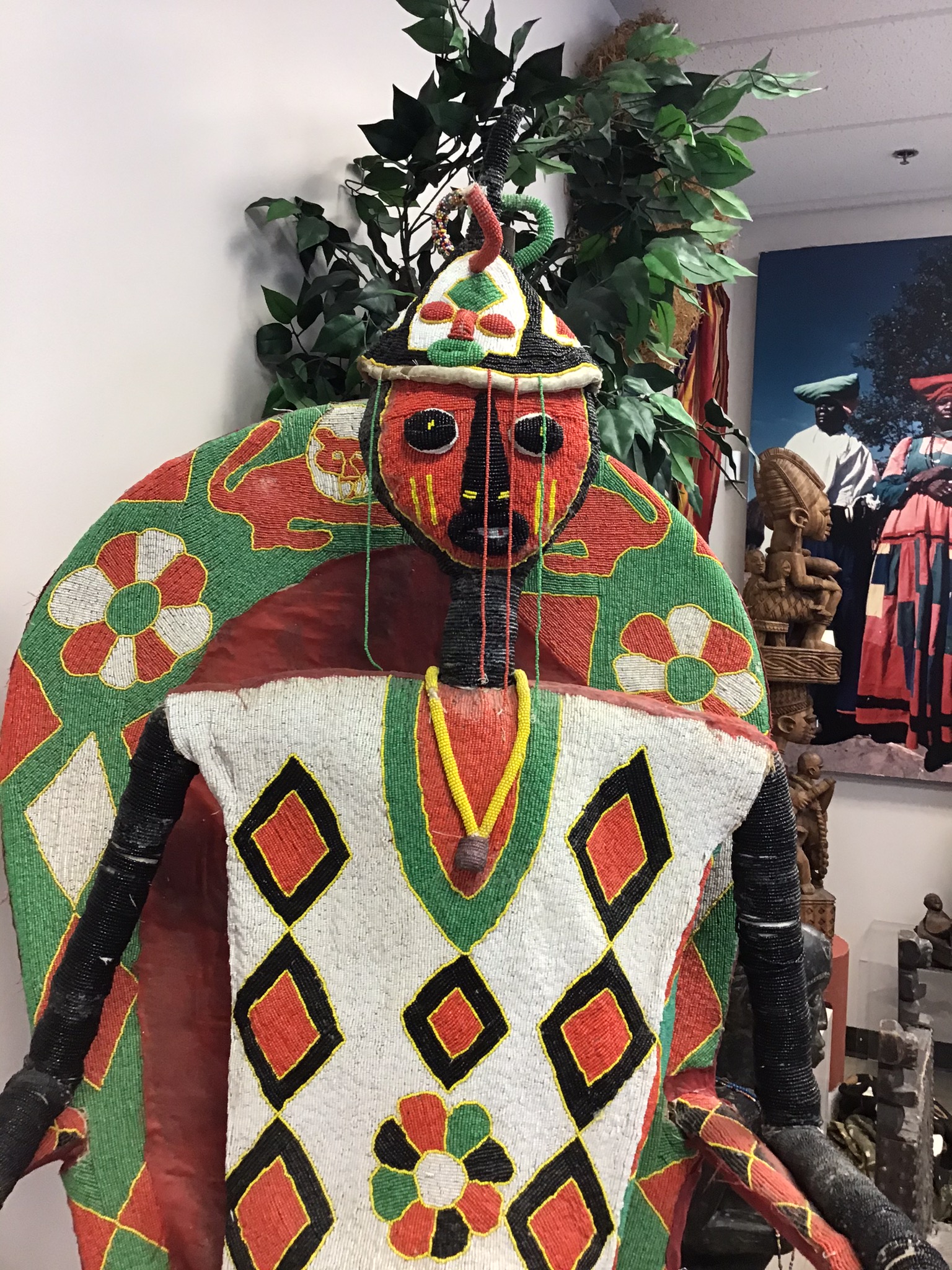 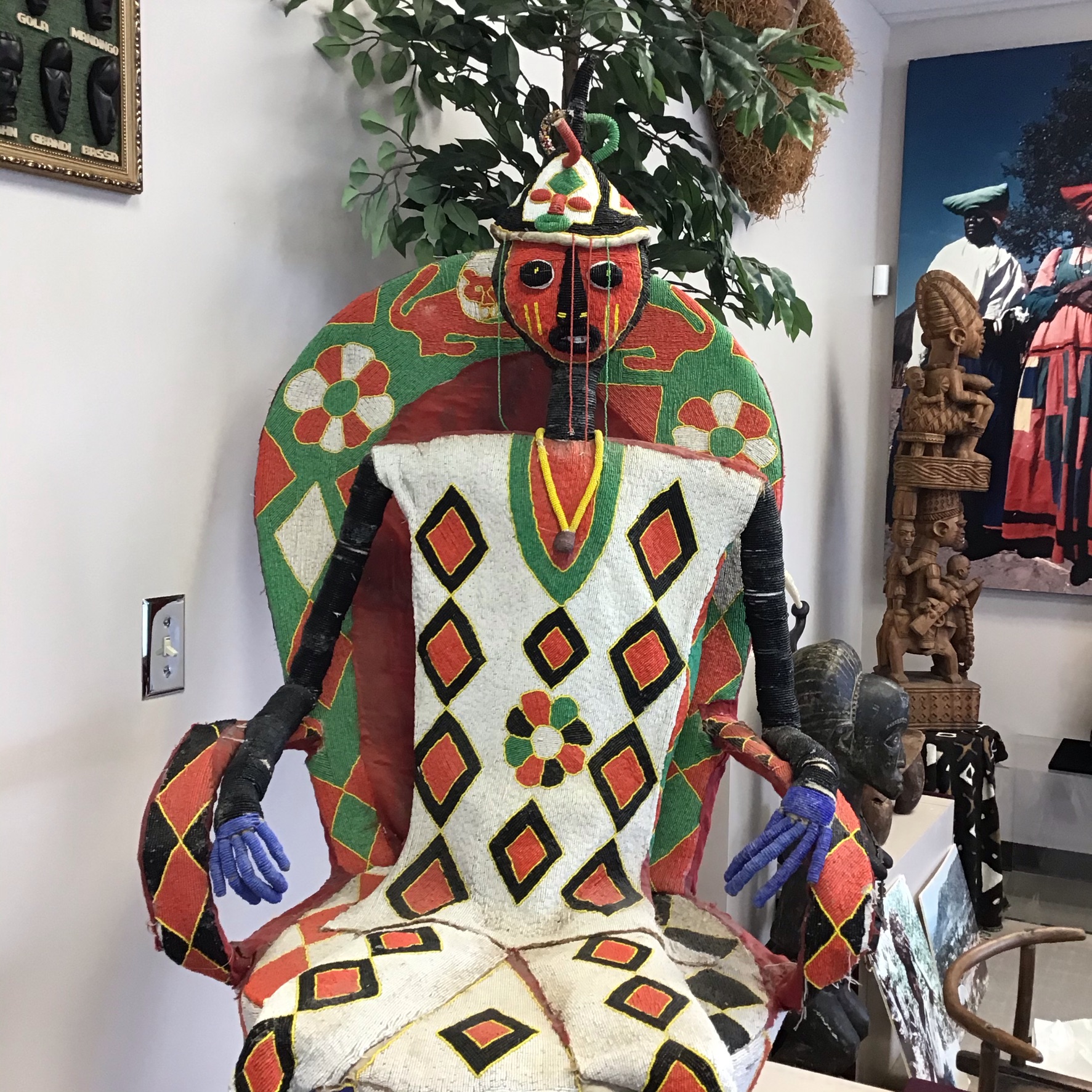 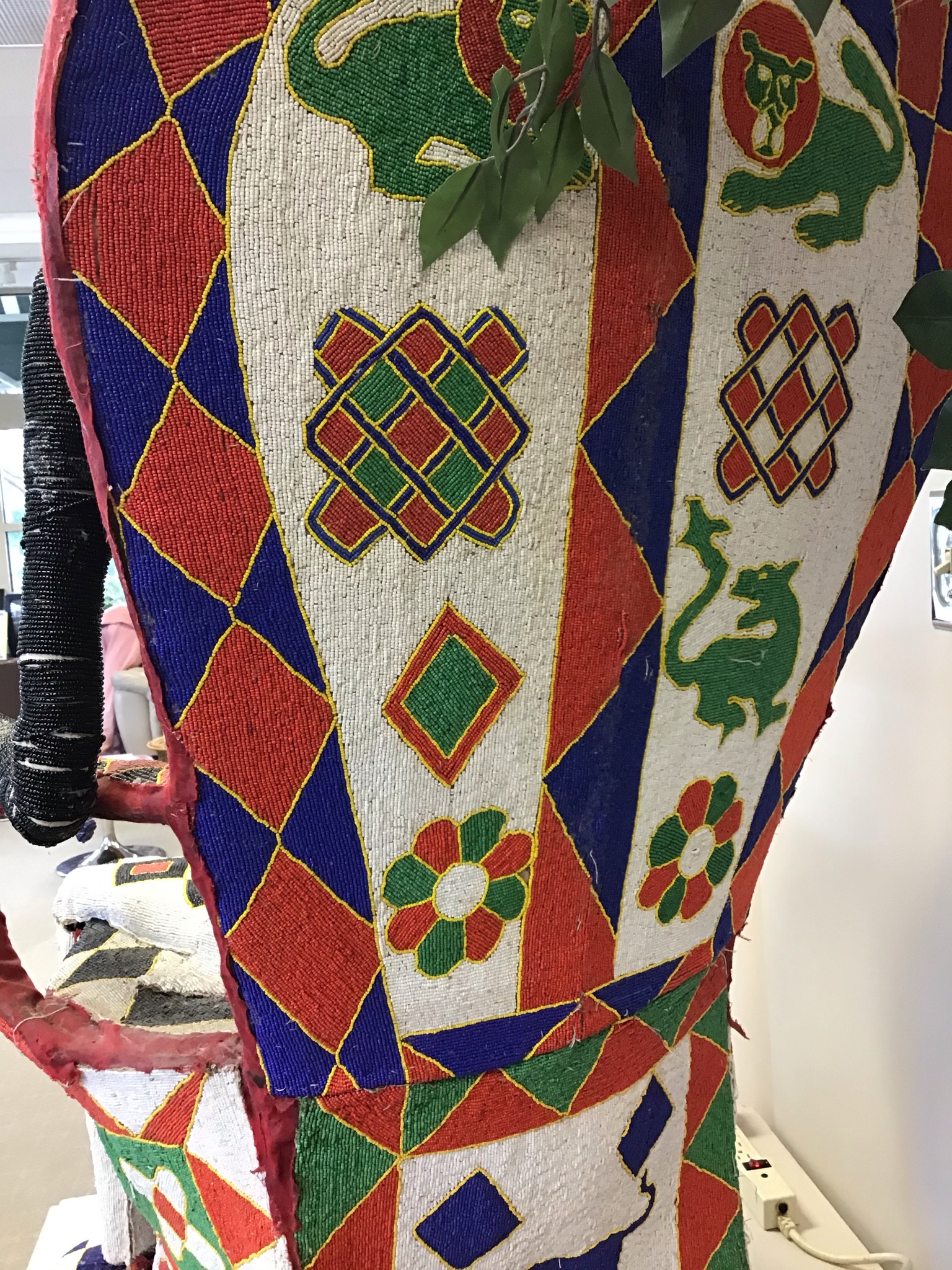 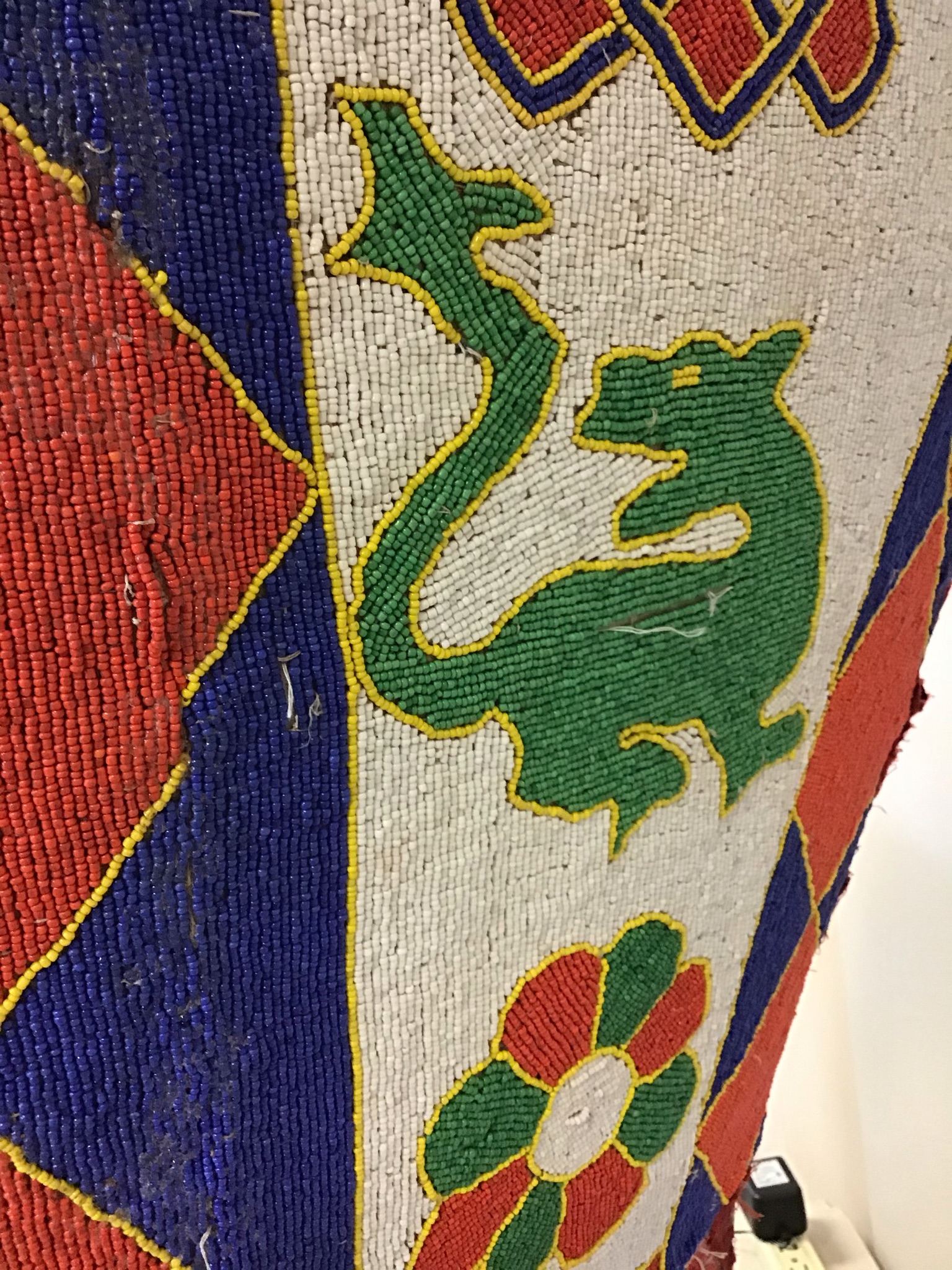 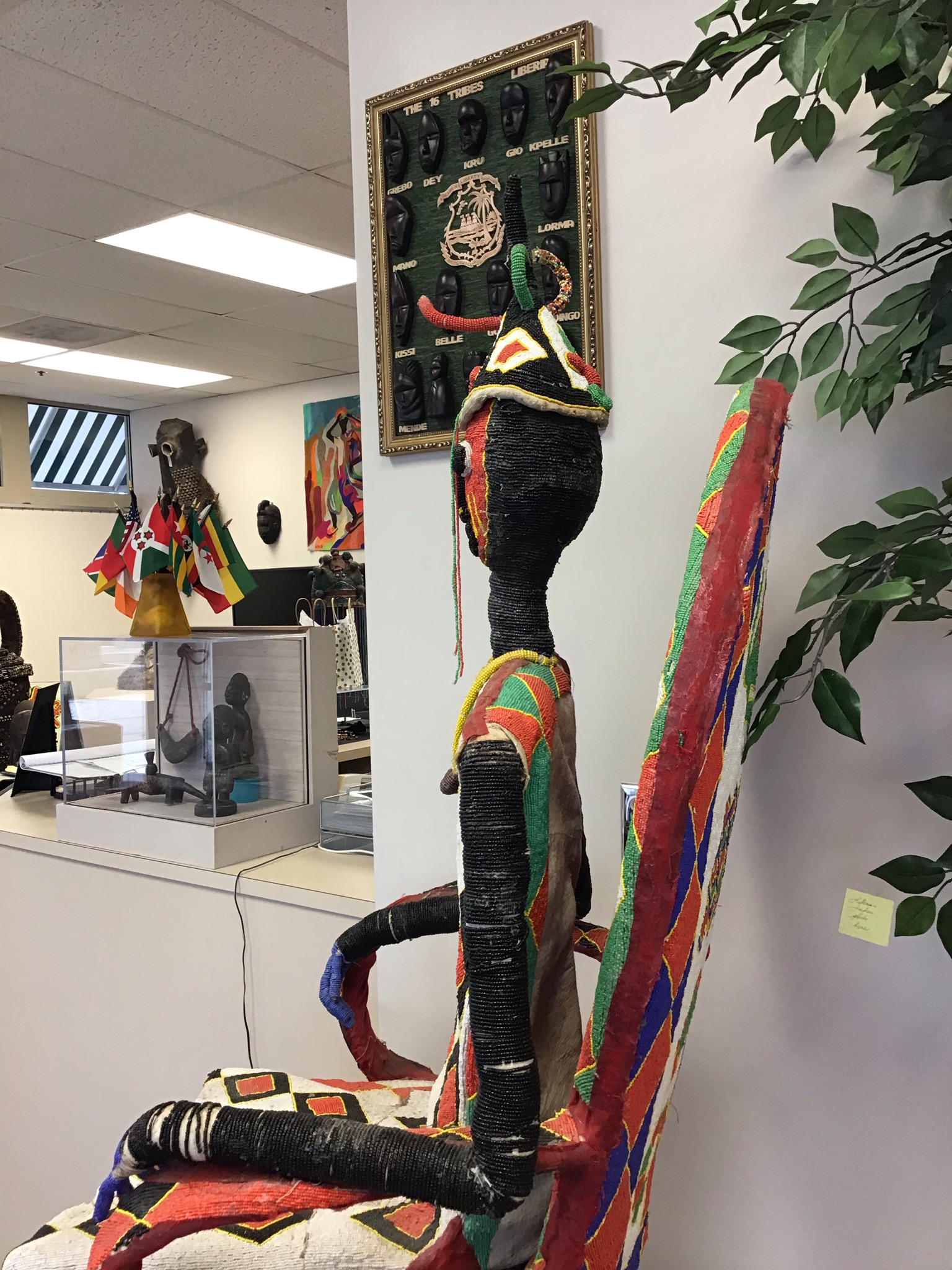 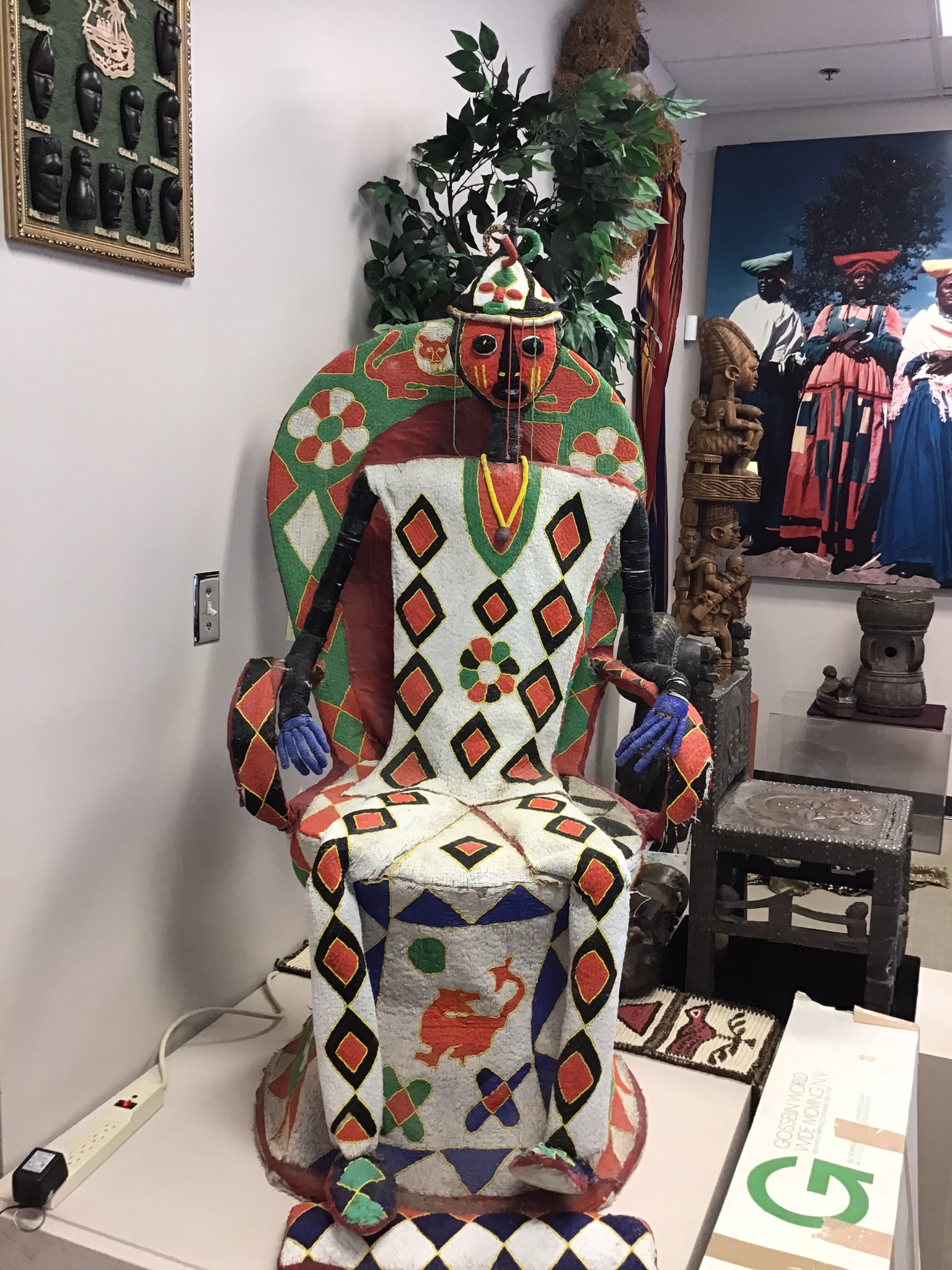 Read the transcribed text for "The Hunter's Shirt" audio.

You are looking at now what is called The Hunter’s Shirt. What I know about this shirt is that it has come from West Africa, maybe in the area of Nigeria. But it is a shirt that would be worn by the hunters in the community. They would be responsible for securing food in traditional times for the entire community and the things that you see on the shirt are reflective of a hunter’s ability. In other words, when the hunter was able to secure a few food for the community, there would be some kind of a token or trophy that he would win, to allow people to see just how effective he was. Like when you if you are bowler, when you go bowling and you win your games, and you if you win a number of games, you get a trophy. Whatever your hobby might be, you will be recognized for that, well, this man has parts of the animals that he had secured, attached to his shirt. Because that shows that he has was able to capture that many animals and to secure that much food for X number of people in his community.

Now also on that shirt, and it’s not always obvious to see, but you’ll see the horns of animals that also was reflective of the idea that he has taken something from the animals that was not used for food by the people that he was serving. But you might see some small pieces of maybe not triangular shape, but rectangular shaped, that would be covering parts of the Quran. The hunter is an Islamic person, and he wore the Quran, maybe very small portions of the Quran, wrapped in paper and attached to his shirt. That was to give him the extra power, or the extra confidence that he needed to be in the area of animals that were not happy to see him because they knew that the hunter could mean the end of their lives. So he needed that extra protection, that extra encouragement to be among those animals. That’s the courage, that’s the confidence that the Quran, because that is his religion, gave him. So he wore them on his shirt, made and sometimes in big triangular shape, sometimes the squares, covered in leather, they’re very well protected from any element on the front and the backs of his shirt. So that he would have that extra power. Now, it didn’t mean anything about magic. It meant that that was his confidence. It meant that he felt that because he was doing something good.

Because of his religious beliefs, and because he was on a serious mission to see people in his community, that he would be protected because he was wearing something that reflected proudly his religion. Now you can’t see the back of the shirt, but the back of the shirt too, has trophies on it, some teeth, some horns, but also some versions of the Quran that as I said earlier, are wrapped in leather to protect them and to make them long lasting. 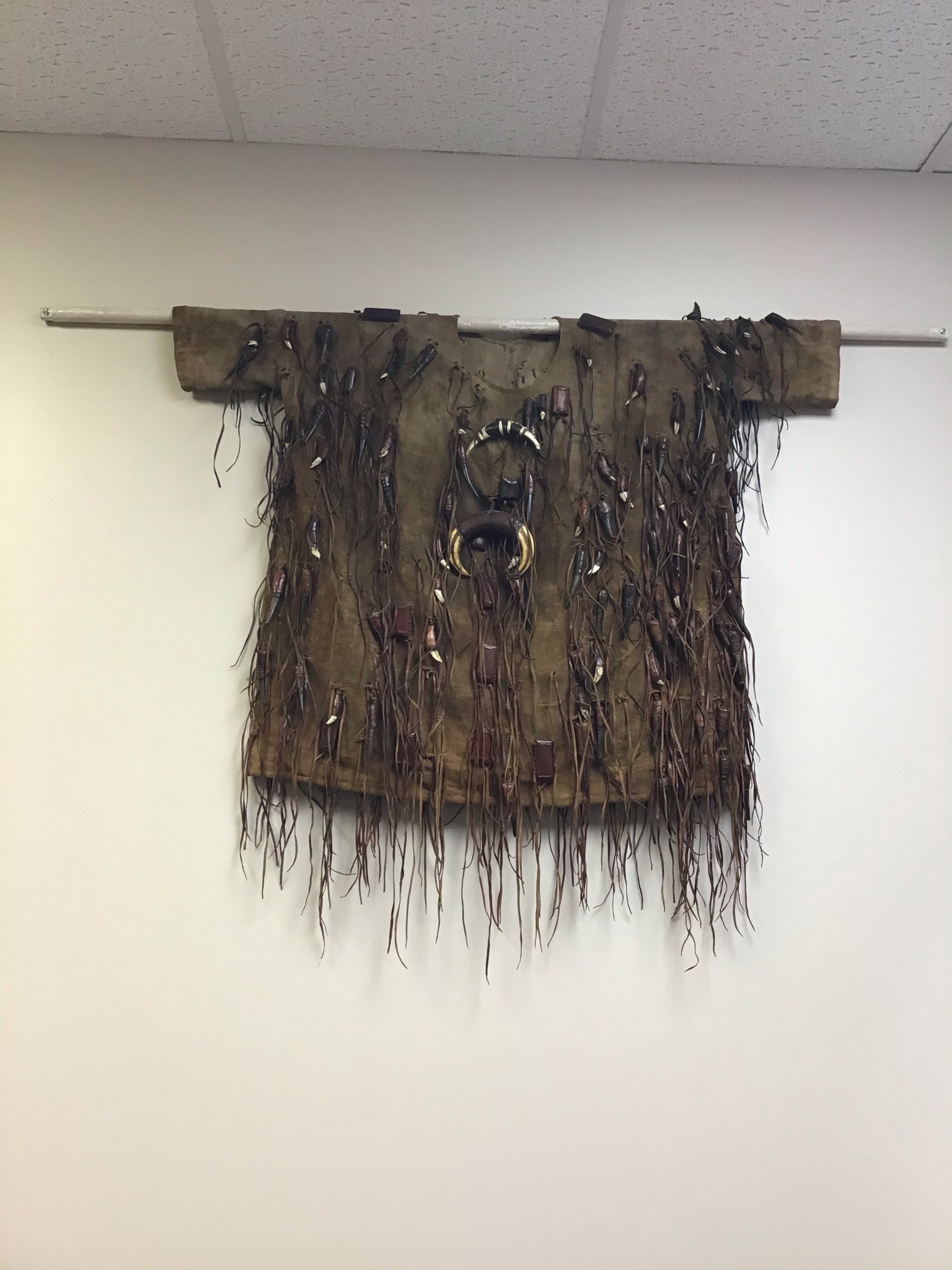 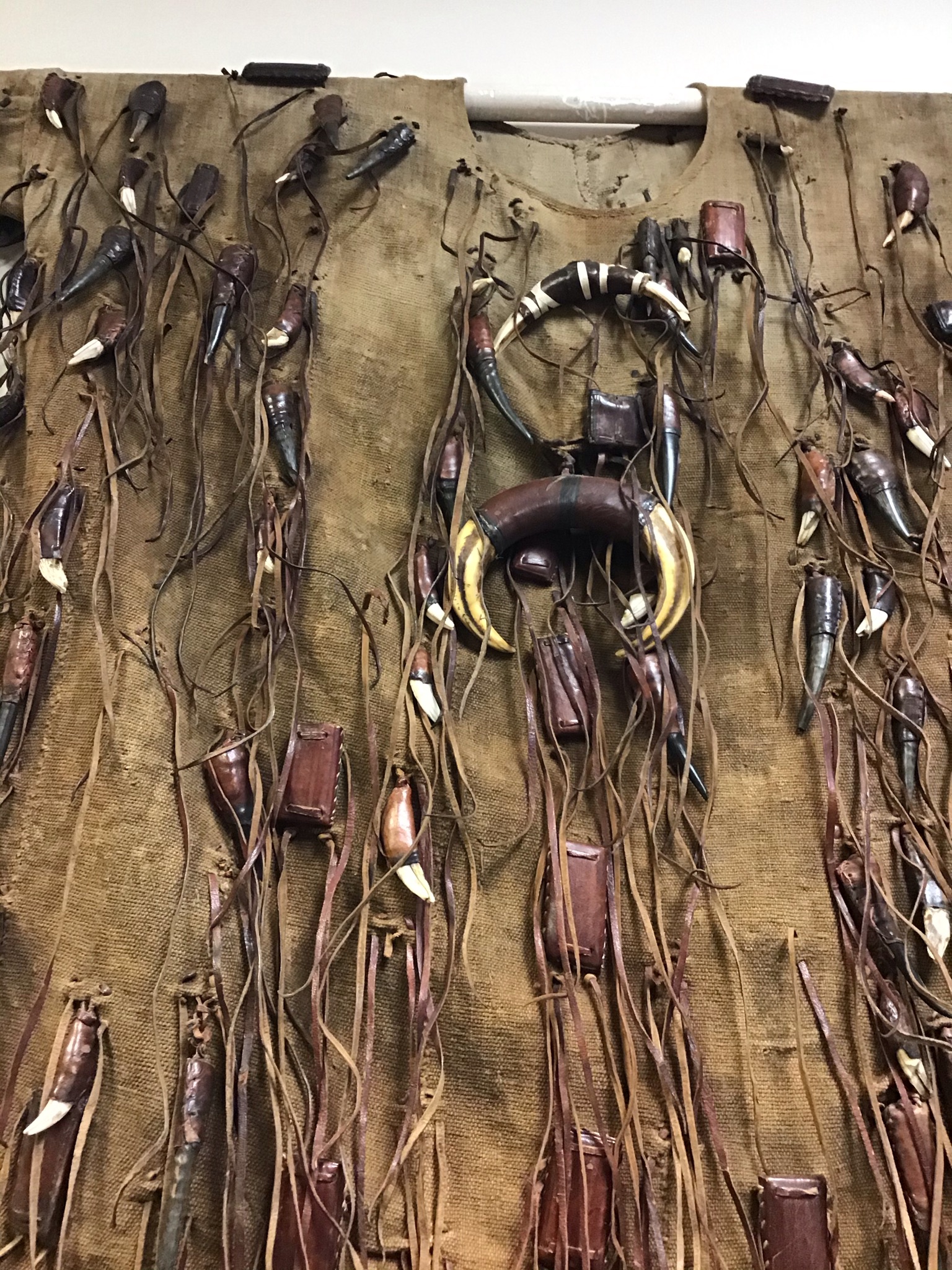 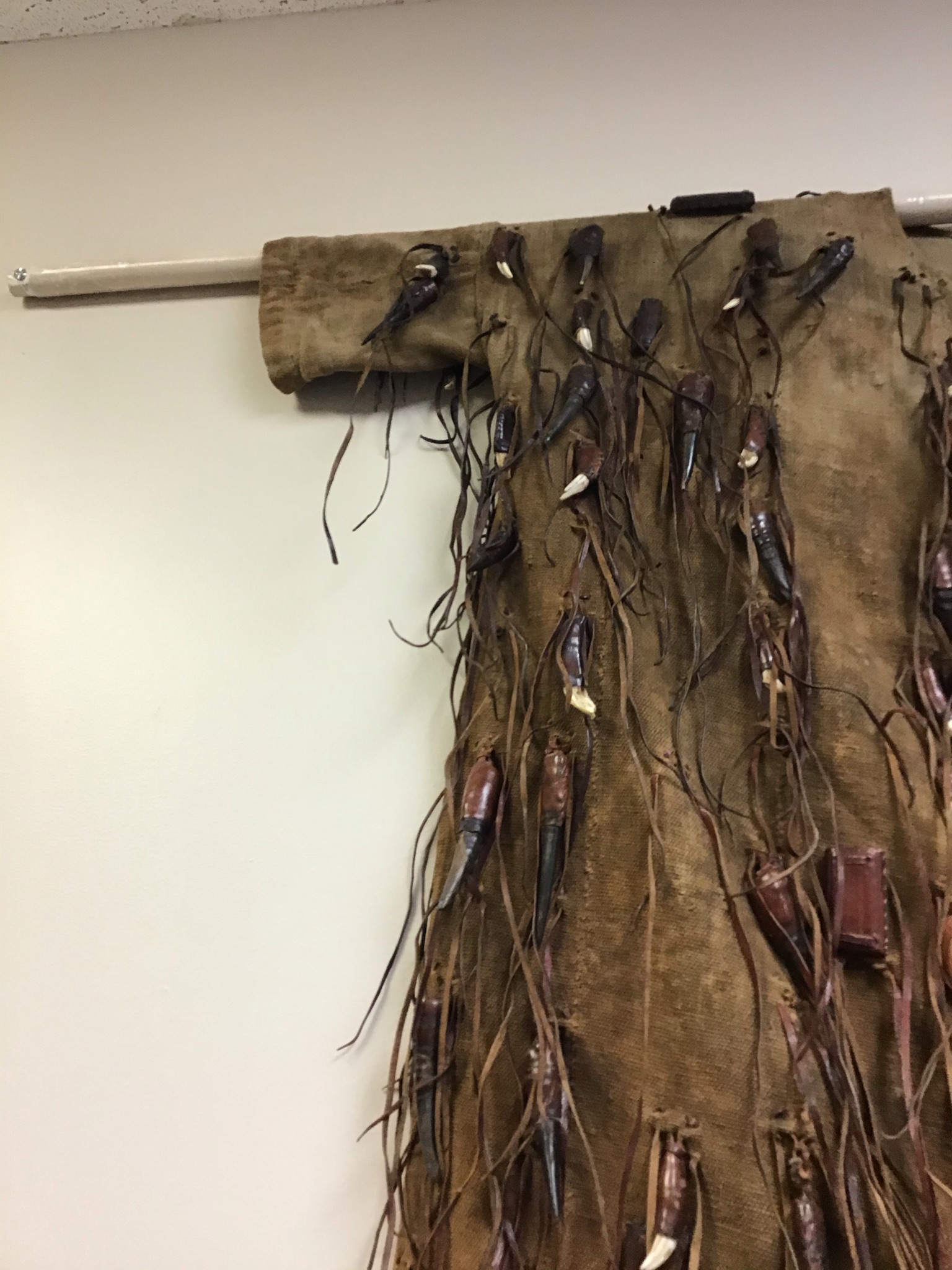 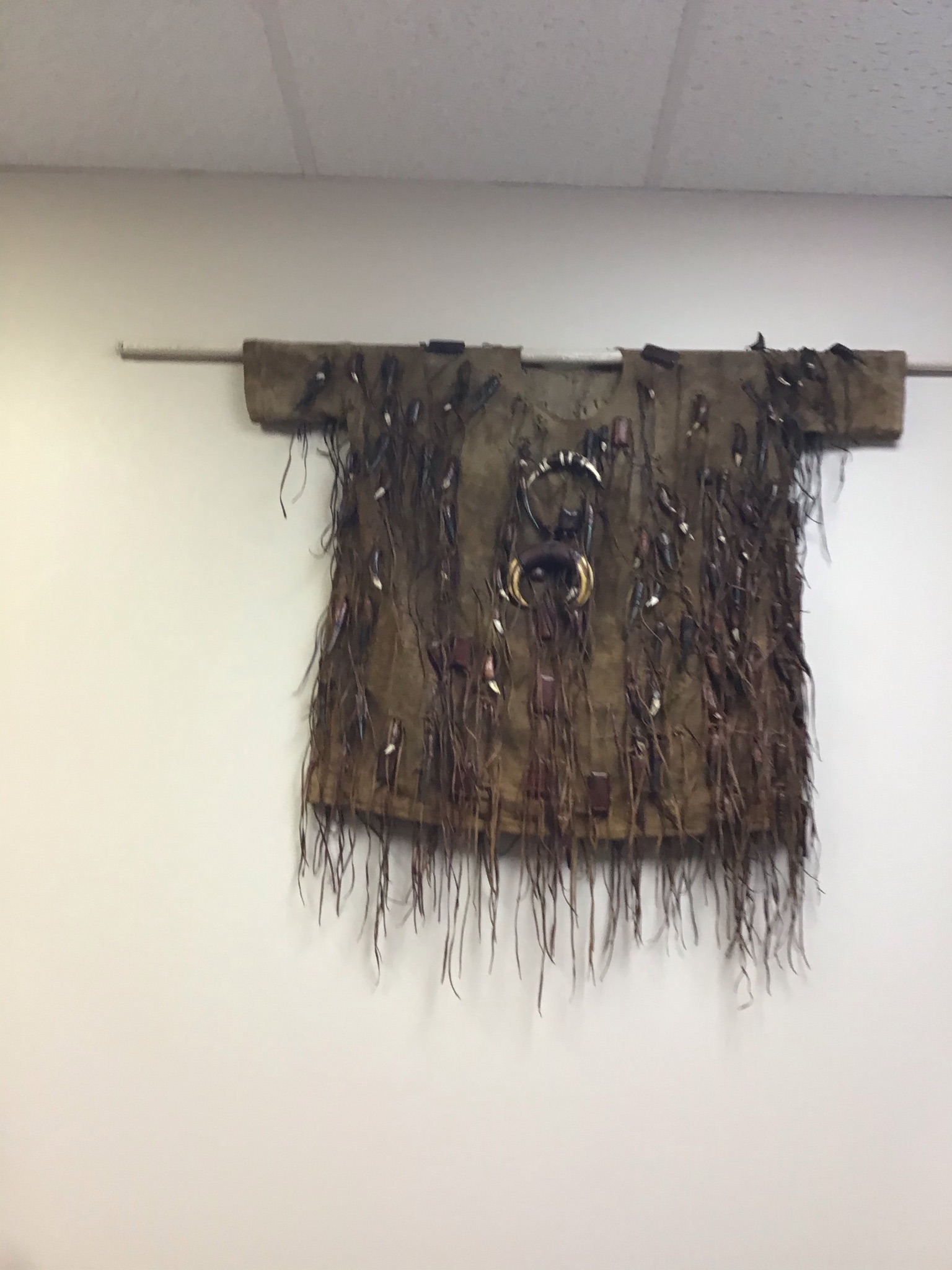 Listen to 'The Butterfly' Short Talk

Read the transcribed text for 'The Butterfly' audio.

The tapestry that you are viewing was done by a gentleman by the name of Abdulay Kassé. He is Senegalese that is he is from Senegal. He is a master Weaver. Some of the works that he has created have hung in the master Museum of the world, the Louvre. He did this tapestry, though, in the African Art Museum of Maryland. We got a call from his mentor asking if we would like Mr. Abdulay Kassé to come to the museum. At that time, I did not know Mr. Kassé. But when his mentor mentioned that he was from the weaving village in Senegal, I knew right away that we wanted him to come, because we’ve been to Senegal. Each time we’ve gone we have not been able to get to the weaving village. So here was Mr. Abdulay Kassé being sent to us so being offered to us and we jumped at the chance. His loom was shipped from Senegal. I think it was the first time his loom left Senegal. And the first time that it left Senegal, the first time that it left Africa, was to come to the African Art Museum of Maryland. We were then located in downtown Columbia and the loom was set up in one of the galleries.

For 13 days, Mr. Abdulay Kassé worked on that butterfly tapestry. He lived in an area in nearby Silver Spring where my husband went everyday down to Silver Spring, picked him up and brought him back. And almost every day I took him home. At the end of that 13 day period that that you’re looking at is the masterpiece that he created. And it was the first piece that he ever created outside of the African continent. It was created right in the museum by Mr. Abdulay Kassé, it is the butterfly which is a popular depiction in that area. There is a long story that I won’t repeat now, that goes with the butterfly since a certain season in that area of West Africa. But it’s all hand done. It’s done in wool that is protected. And we had the school groups come in.

To our surprise and delight, Mr. Kassé gave it as a gift to the African Art Museum of Maryland. We invite you to come and see it. We are back in Colombia, delighted to be back to our city. Because after completing 40 years to the community, thank you very much for your support. We look forward to seeing you. 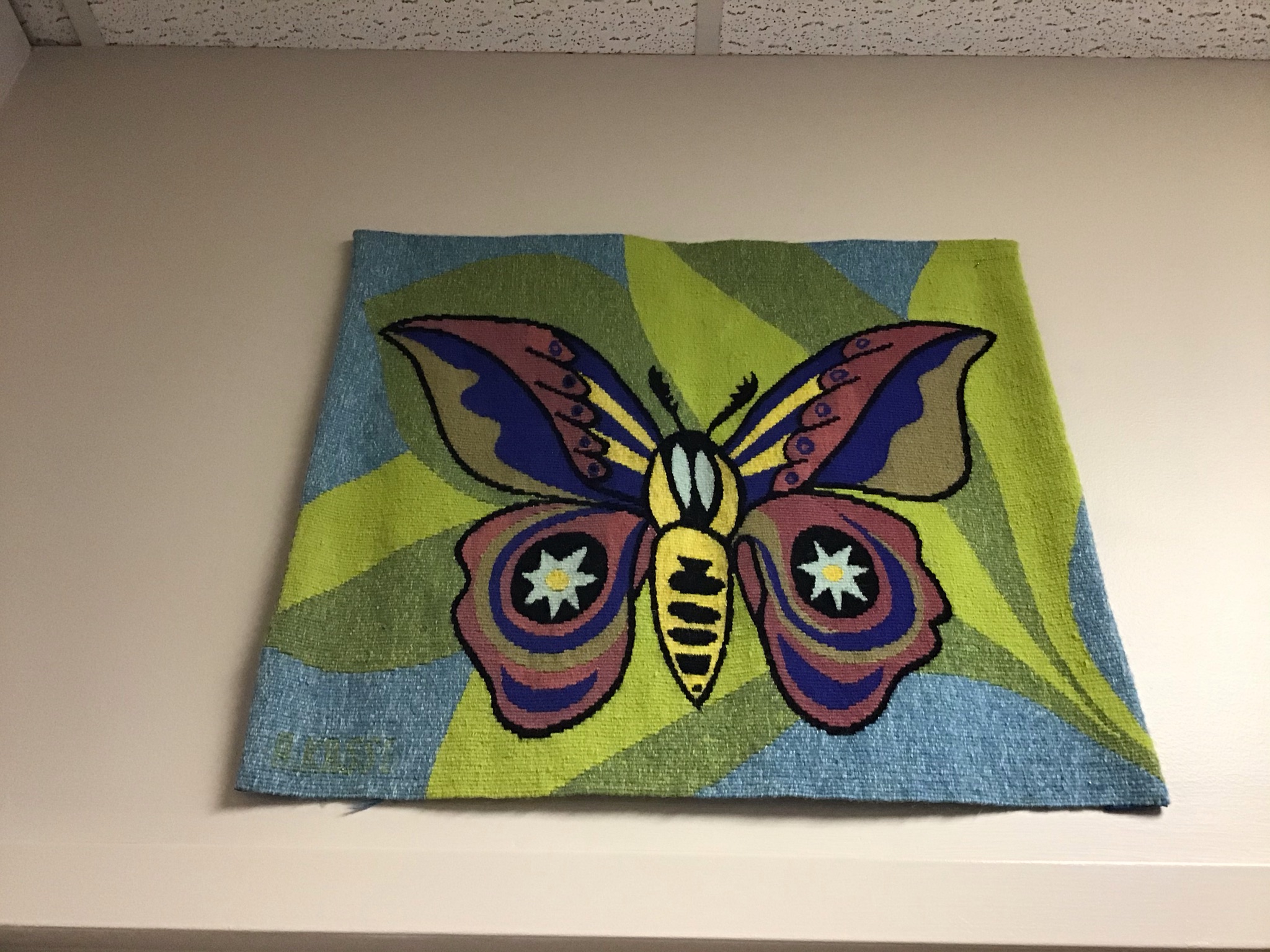 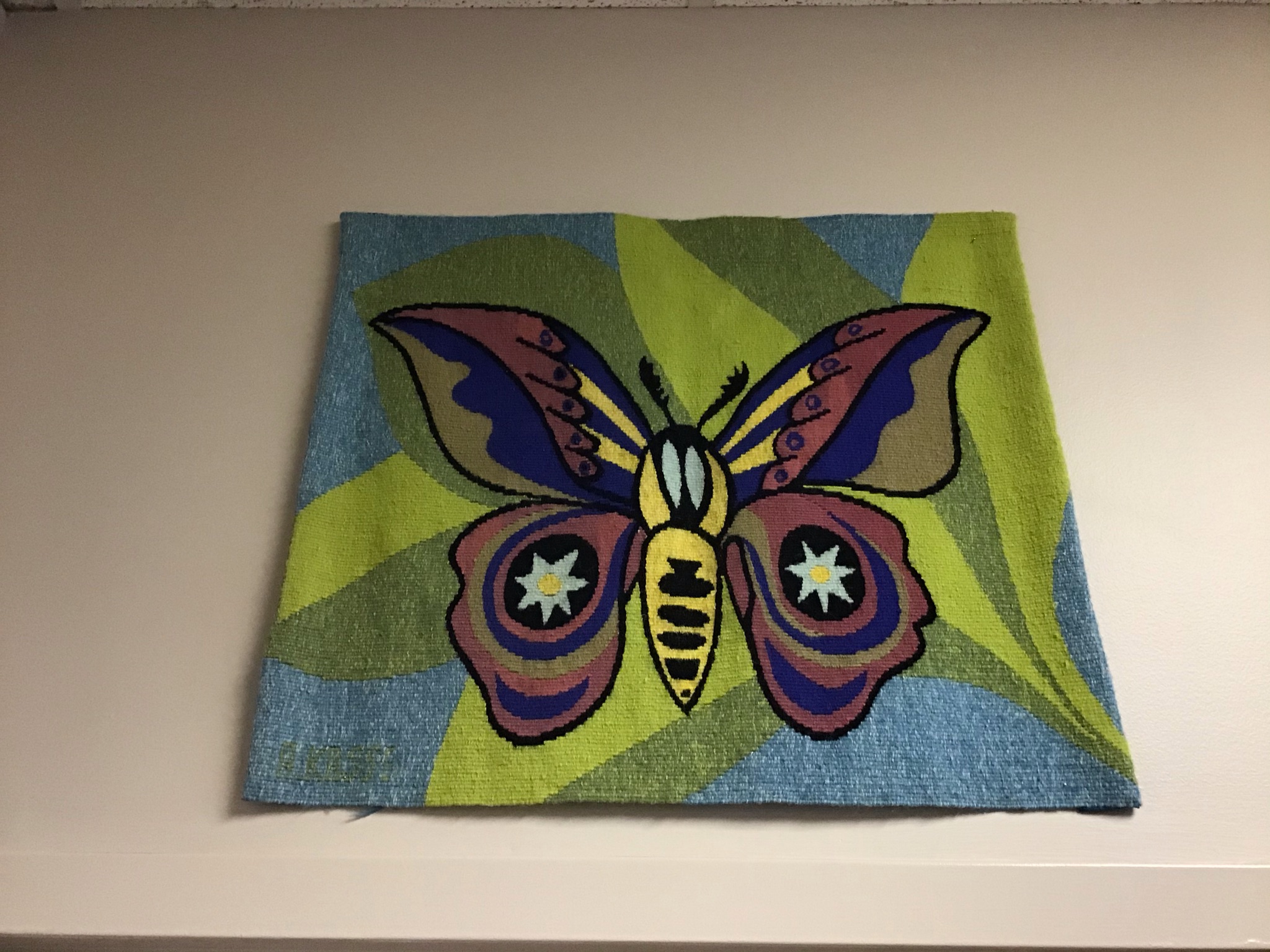 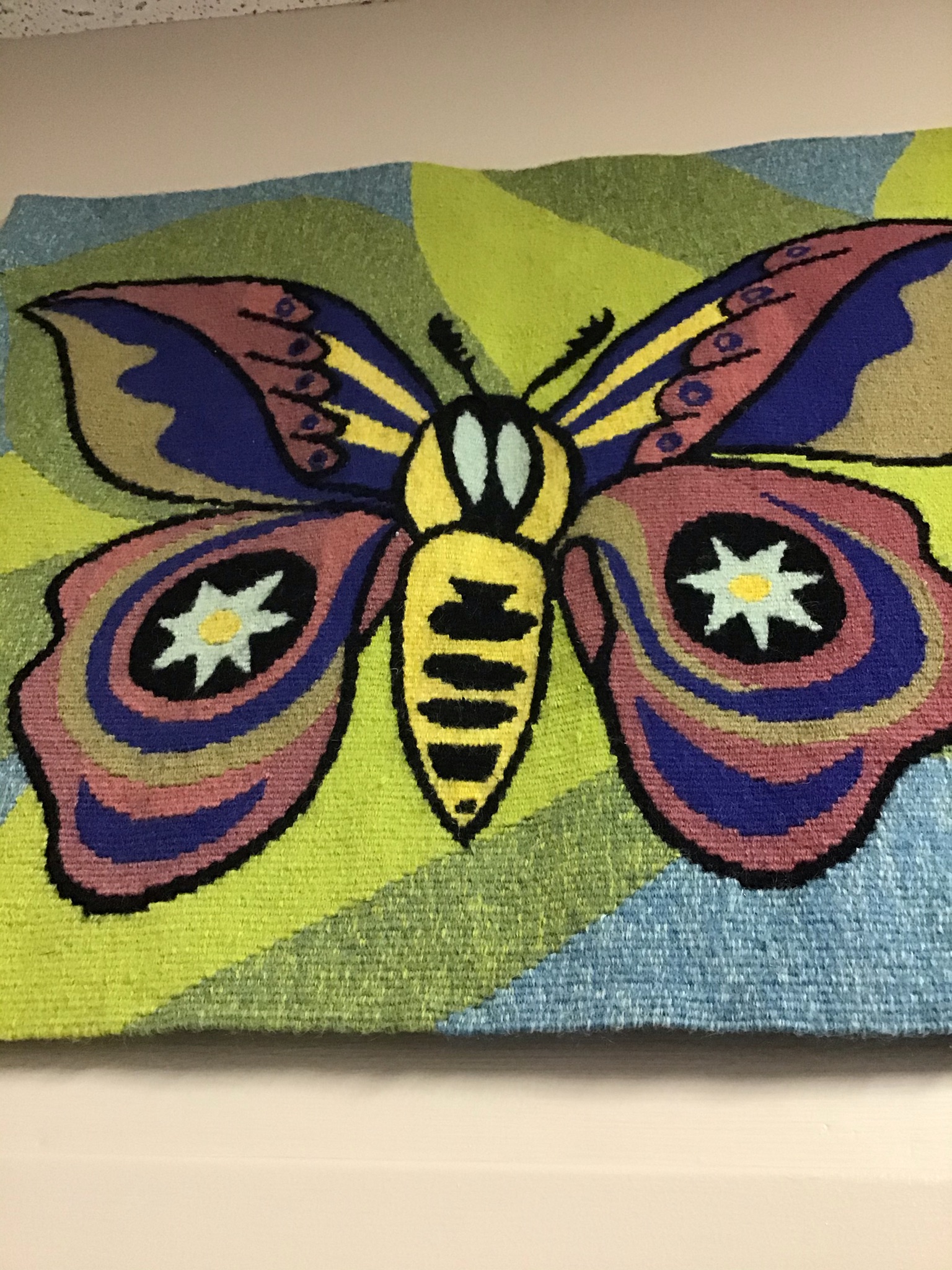 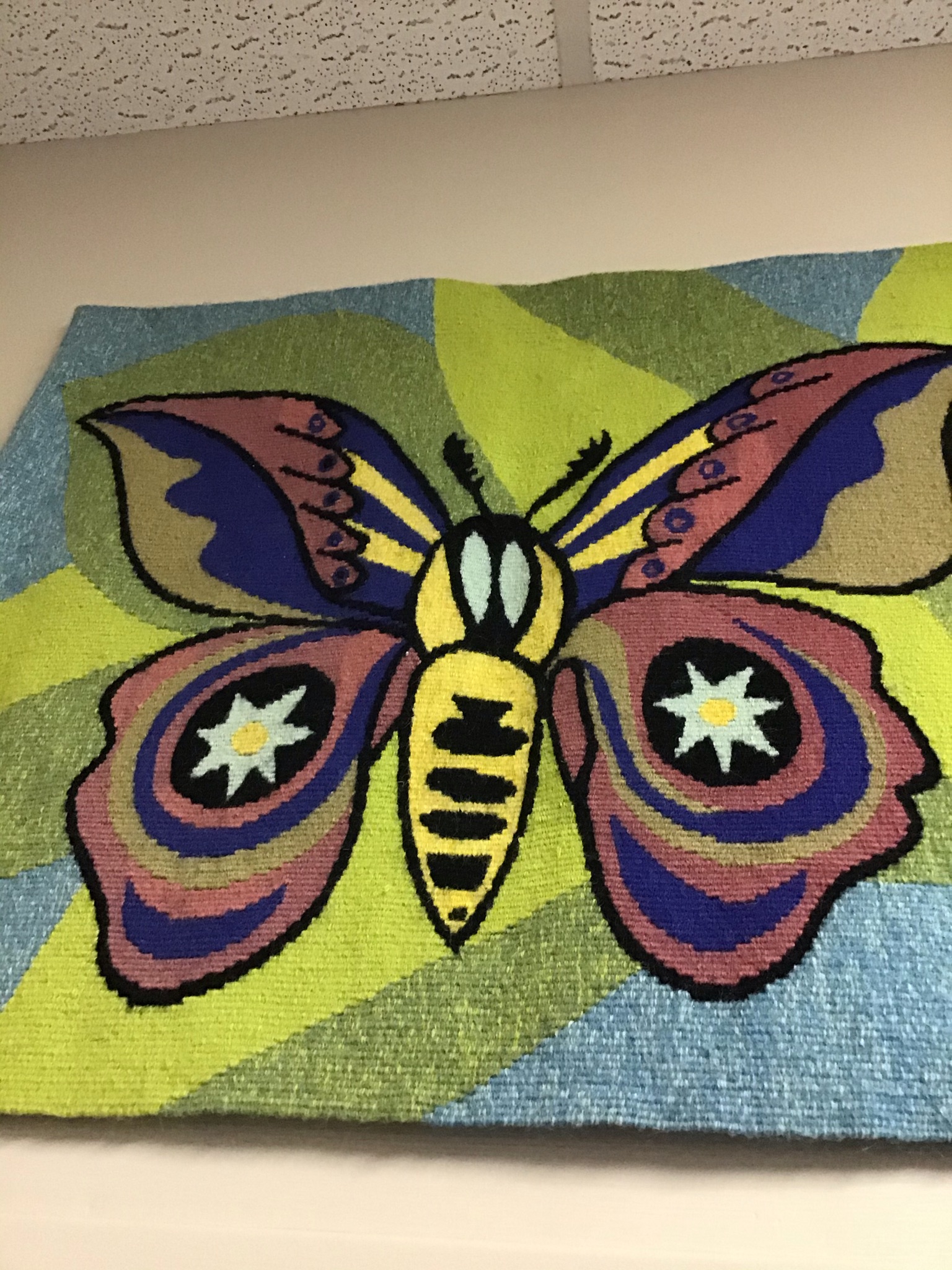