Drop us a line sometimes and let us know what you think.

Whenever anybody comes to the African Art Museum of Maryland, and we point out that article is the mask, they think that we are pointing to something else, because most people have never interacted with something that we’re calling a mask, as large as that. But that is the largest mask that we have ever exhibited at the African Art Museum of Maryland. It comes from the Chuwa people who are indigenous to the country that we know as Malawi.

It is designed to be worn by one person. It is representative of, at the top, you will see the Atlas of an anthill, we’re talking about speed, we’re talking about grace, we’re talking about the ability to move with grace and with speed. And when the one person gets inside of that mask, that is his responsibility to move with grace, and with speed to allow the long piece that is hanging down, but that long piece is the tail of the antelope. Now, we know that antelope don’t have long tails like that, but without that, some of the drama would be lost. So there are some liberties that have been taken to allow the object that is being danced to demonstrate a degree of drama. But the object is to get up such rhythm and speed and spinning that that long piece that is the tail of the antelope sticks straight out in the air. When he does that, he has achieved his goal then he relaxes. Then he will continue to dance.

If when you go to Africa and there is a degree of hospitality that is shown you by the dancers, it’s a long process. They don’t stop dancing and they often invite you to dance with them. Now they don’t invite you to dance the mask, but to participate in the dance that might come after or before that. It weighs less than 50 pounds. It looks like it weighs much more. It’s made of a bamboo frame and we know that bamboo is very lightweight. The covering the bamboo frame are cornstalk leaves, which gives it that finished look. It’s very lightweight piece of masquerading to let you see the responsibility of the young man who’s dancing the Kasiyamaliro. 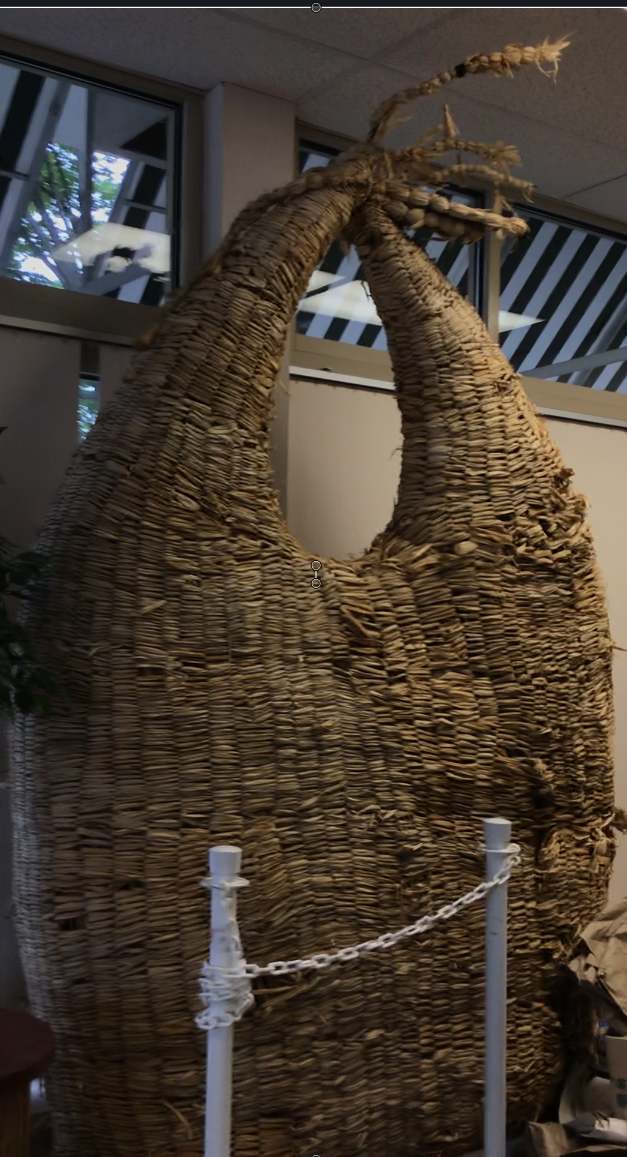 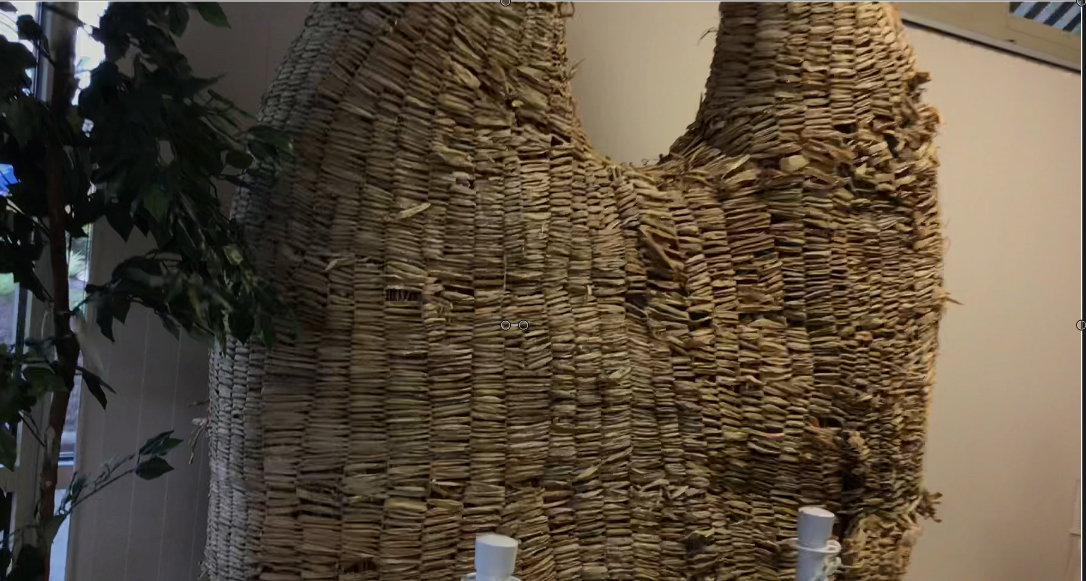 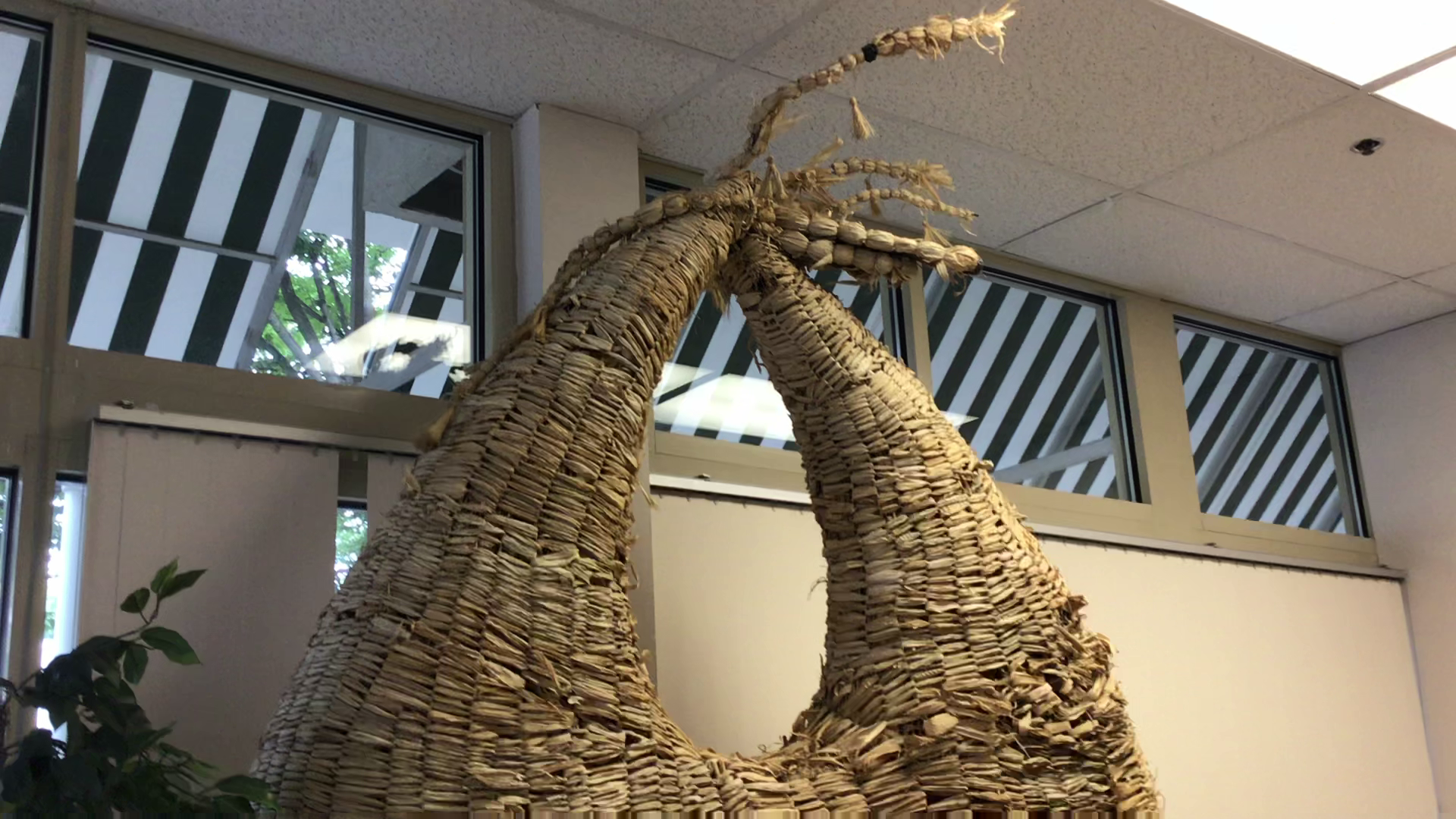 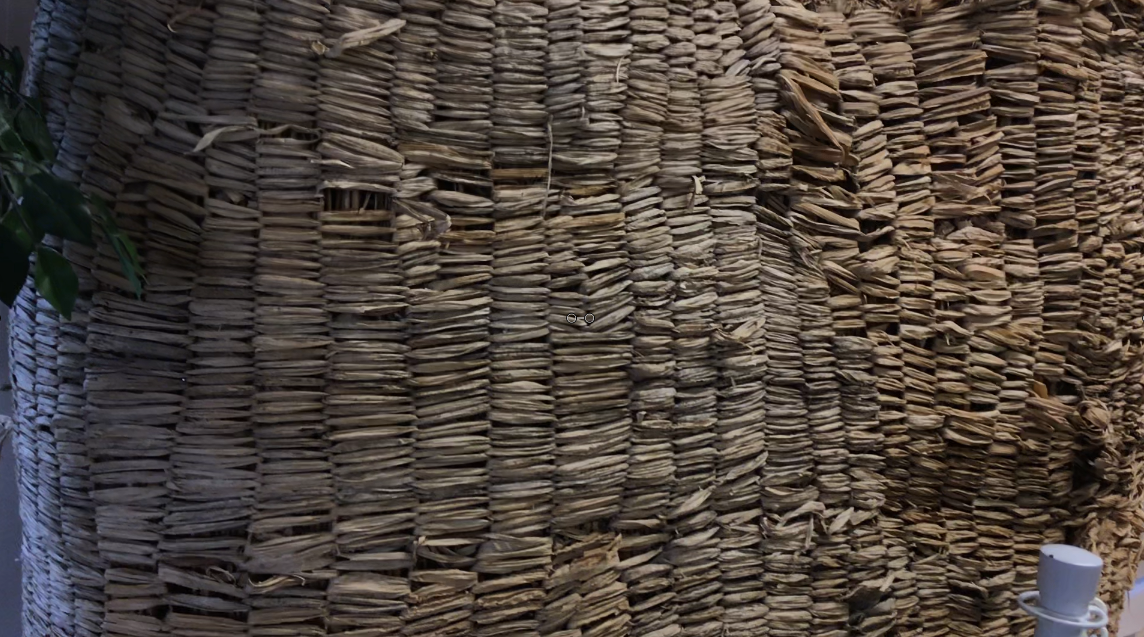 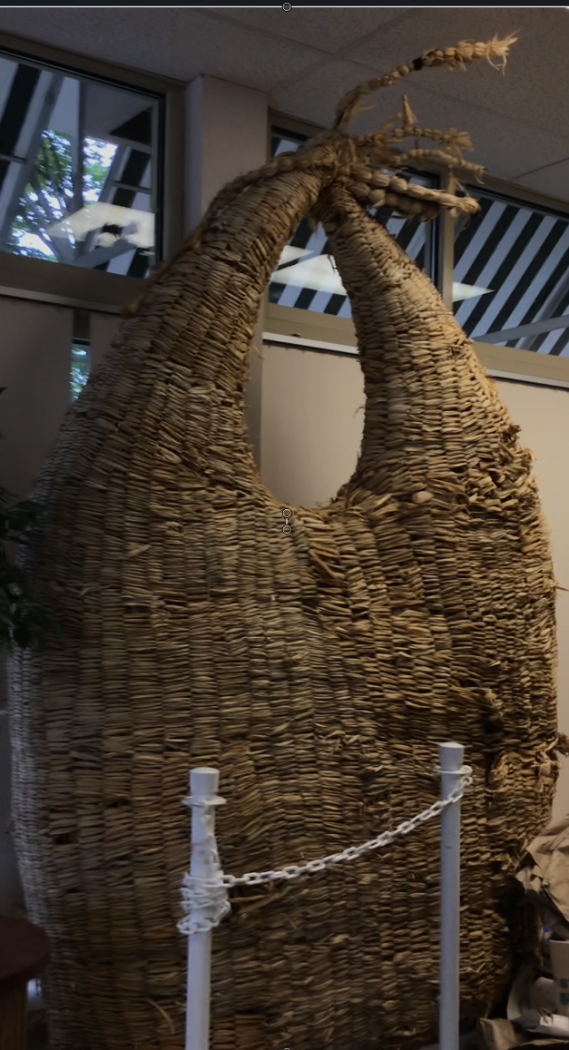 Ambassador Brown has been ambassador to several African nations. His reputation has been such that wherever he’s gone, the people are always sorry to see him leave. When he was leaving one of the places there for which he served as Ambassador with Ghana, and when he retired and was ready to leave Ghana, they presented him with this chair that they had made.

Amongst some African people of guests, people around the world, they would really give you something that they have made or something that was theirs, as opposed to giving you money or something like that something they’ve purchased, because that means that much more that they felt they put the time in to give to you. So they made this chair for Ambassador Brown upon his retirement and his leaving the service as ambassadorial positions. It’s made of cow skin, and of course, wood and then the leather and the brass nails. He has a picture of it he told me with him seated on it.

We get a lot of gifts, such as the one from Mr. Kenneth Bache, such as the one from Scott Faulkner, who lived in Malawi and was a president of the Peace Corps in Malawi. We’ve been very fortunate to receive gifts and a lot of times they come from people who have lived on the continent, taught there and now are coming back to the U.S. and they are downsizing. They know about our educational programs and believe in what we’re doing and they support us. We were given this chair that was made for Ambassador Brown because of the loving care that the people put into it and because of the way that they felt about Ambassador Brown. 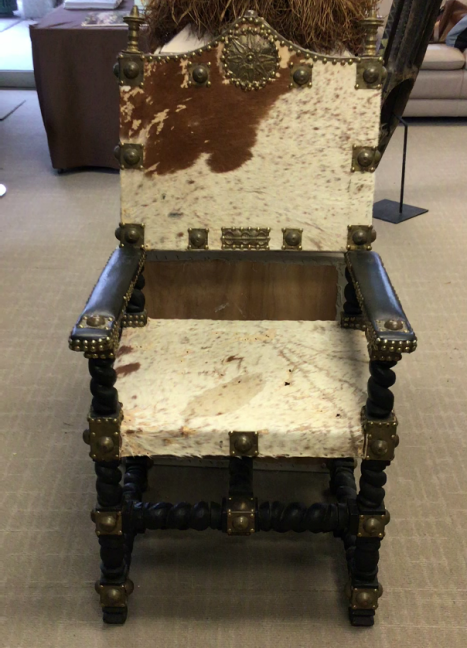 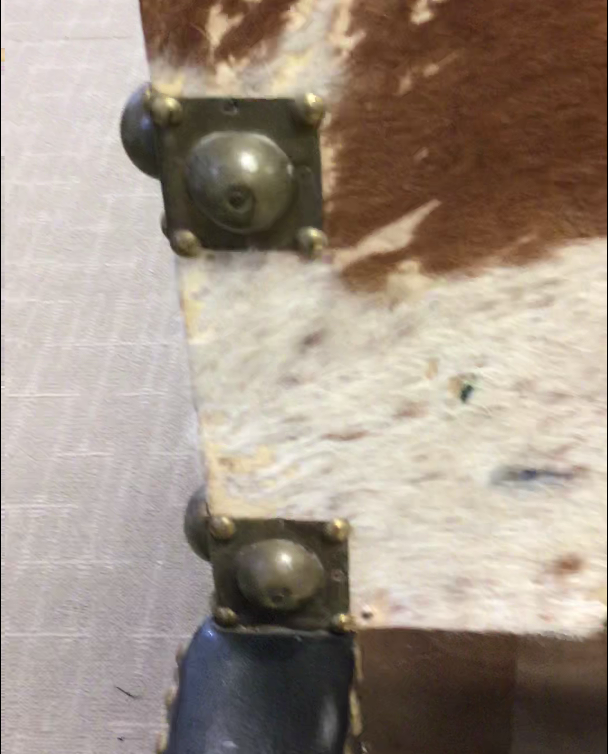 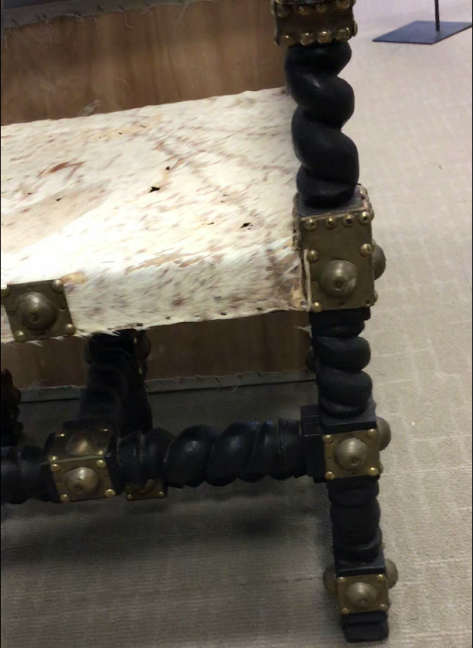 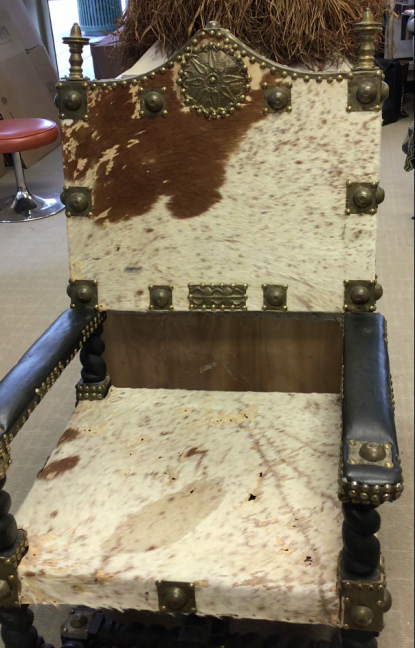 Mr. Kenneth Bache called and said he had just come back from Nigeria, and he and his wife were downsizing. He wondered whether or not we would like to have a piece that when he was in Nigeria he saw being created. Now that they’re back in the United States, he and his wife are downsizing. He found out about us and wanted to know whether or not we would like to have this object. Of course we told him, we’d be delighted and thanked him for thinking of us. He then said he would come and bring it to us on a particular day, at a certain time. When he was not there, we were hoping that nothing had gone wrong within his household. It turned out when he did get there, he apologized for being late, but said that he had to respond to Gorbachev. That’s why he was late, because at that time, there was something going on between the U.S. and Russia. He was in a particular position to be the one to respond to Gorbachev, who was one of the Russian leaders at that time. We were just amazed when we saw the piece, and amazed that he was explaining to me and my husband and he was in a position to be writing Gorbachev, we were just amazed at that.

This house post tells you a lot about the Yoruba people of Nigeria. The Yoruba are a major ethnic group of Nigeria. This is depicting a family, a protective father, who has a European weapon at his side. He’s not galloping around to shoot people. It’s just a symbolism to say that he is the protector of his family. He is at the bottom, he is on a horse that is also well decorated. He is well decorated himself and well dressed. So he has been depicted by Lamidi Fakeye, who is fifth generation master carver, of a family well off. That is depicted by the kinds of clothing that he has and the fact that he is on a horse, because the horse is expensive to maintain. So when you see that he’s on a horse, that gives him a certain level of height in the society. The horse too is well decked out. So again, he is not a struggling person. He has been depicted as a family that is well off but he is the protector of his family. The European weapon is as I said earlier, just to give you the idea and to remind you that he is the protector of his family.

His wife is on a pedestal and she has a baby at her back as well as she is feeding a baby. The mother being the nurturer, doing something physically, feeding the baby with parts of her body that the male cannot do. It is expected of her to do that. As a mother, she is proud to do that. She too is well dressed, having a very elaborate hair arrangement and also, the jewelry. We have to assume that this is an expensive piece of cloth and they are depicted as a family that is not struggling. You will see that the baby is being fed. It tells you a lot about traditional living. It used to be all over the world or much over the world that the mother is supplying the life for the baby. When the baby is born, the baby cannot chew, the baby cann only take liquids, but cannot take solid food. So the liquid that she is getting from the mother is sustaining life. If that mother is not prepared or cannot provide that liquid for the baby’s survival, then someone who has just had a baby would be asked or they would be expected to do that so that the baby will live and be healthy to grow up to be a very responsible person among the Yoruba people. You will notice on the mother, as well as on the Father, ethnic markings. That depicts that they are Yoruba. This is a contemporary piece. It was designed to depict the family and it is called a House Post. House posts generally supported portions of the roof of a traditional home. 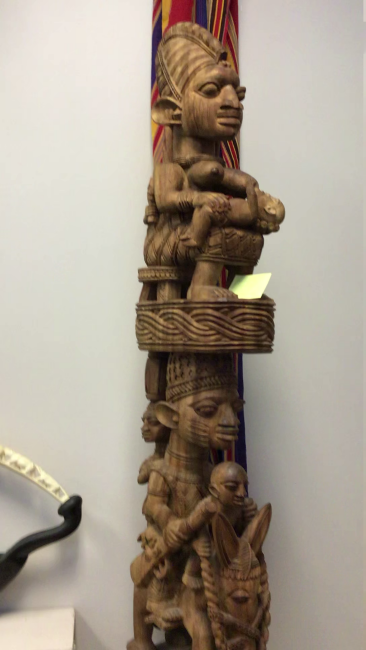 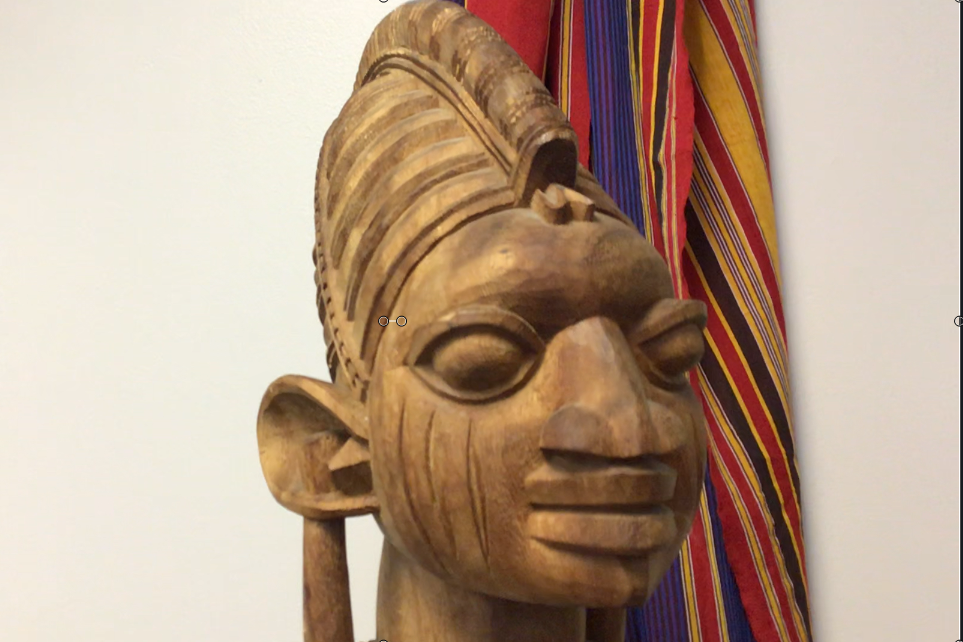 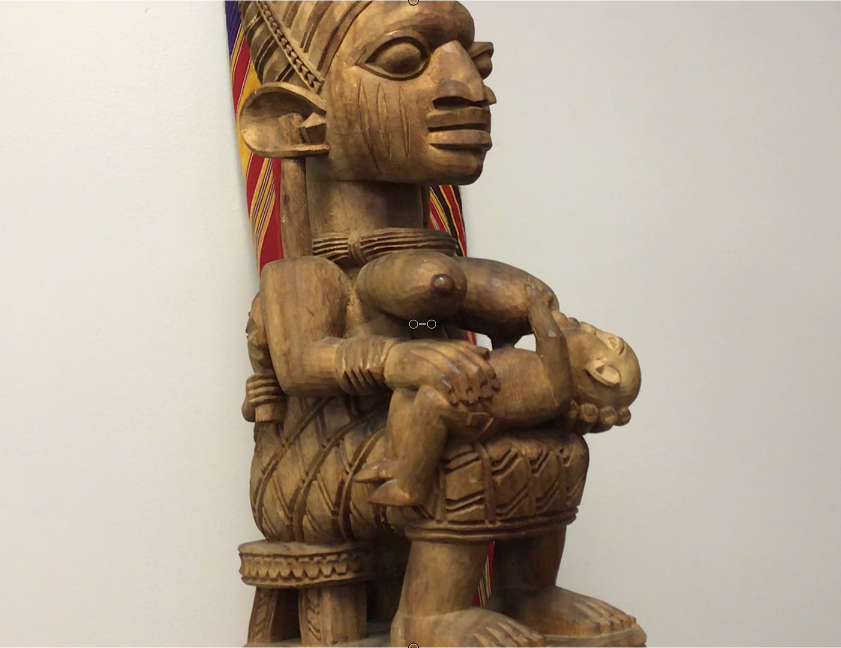 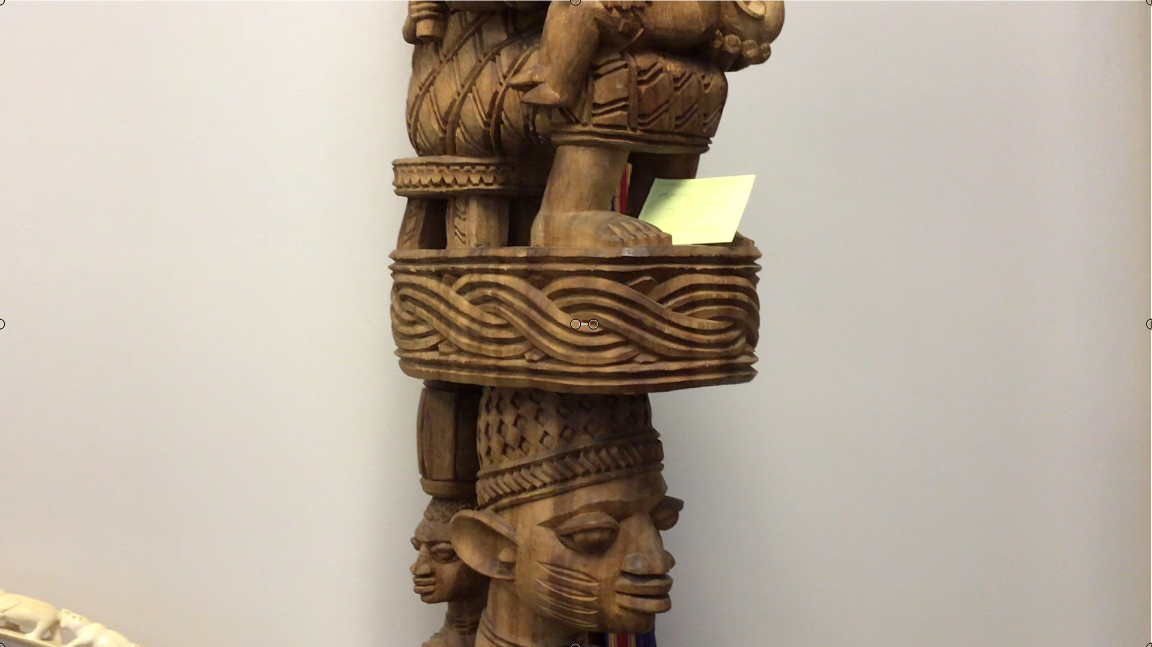 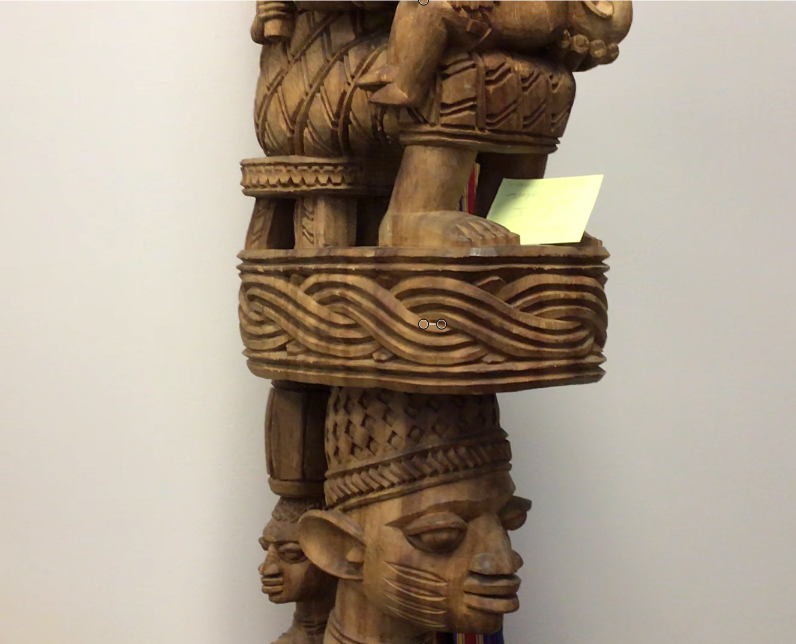 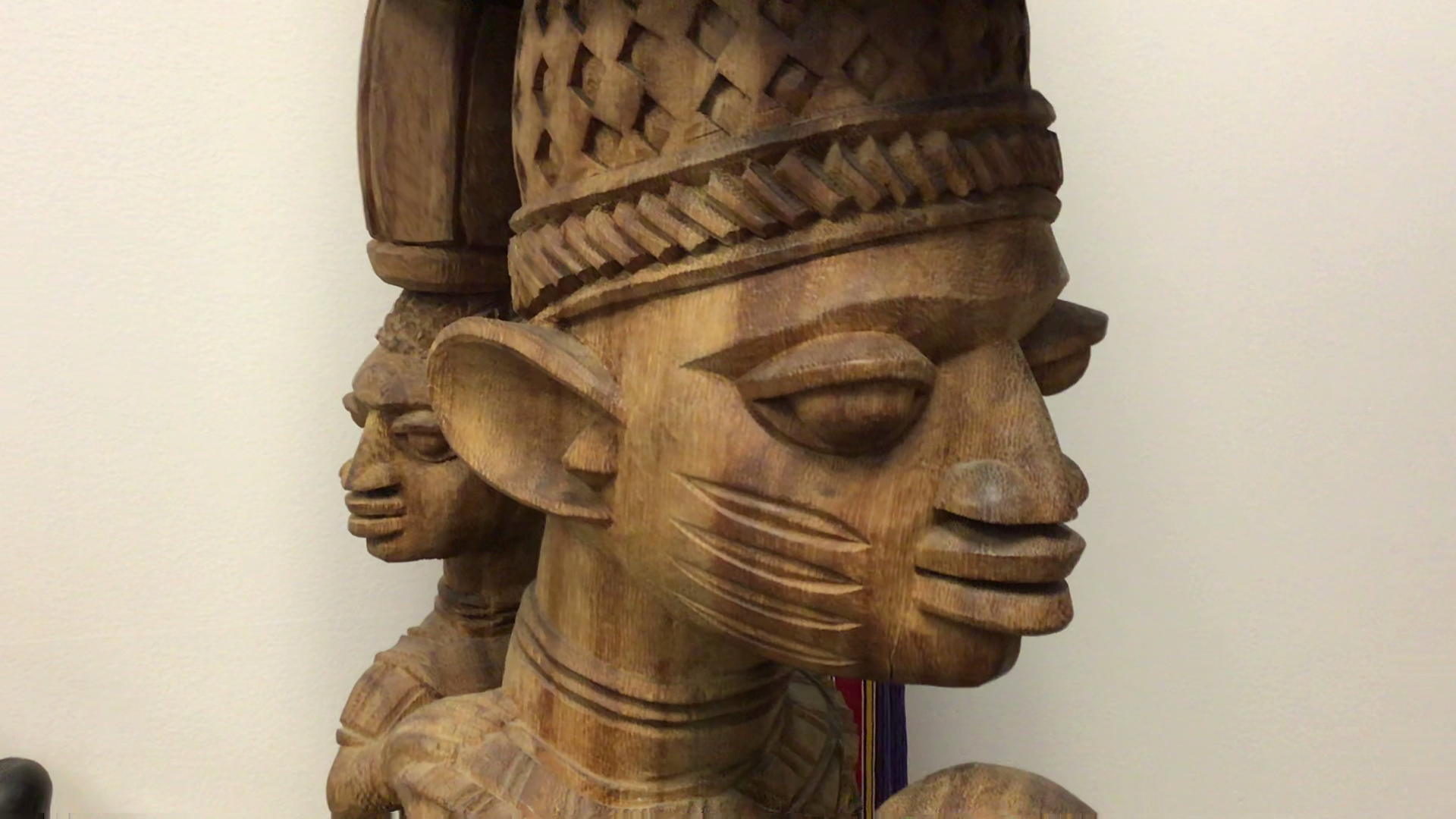 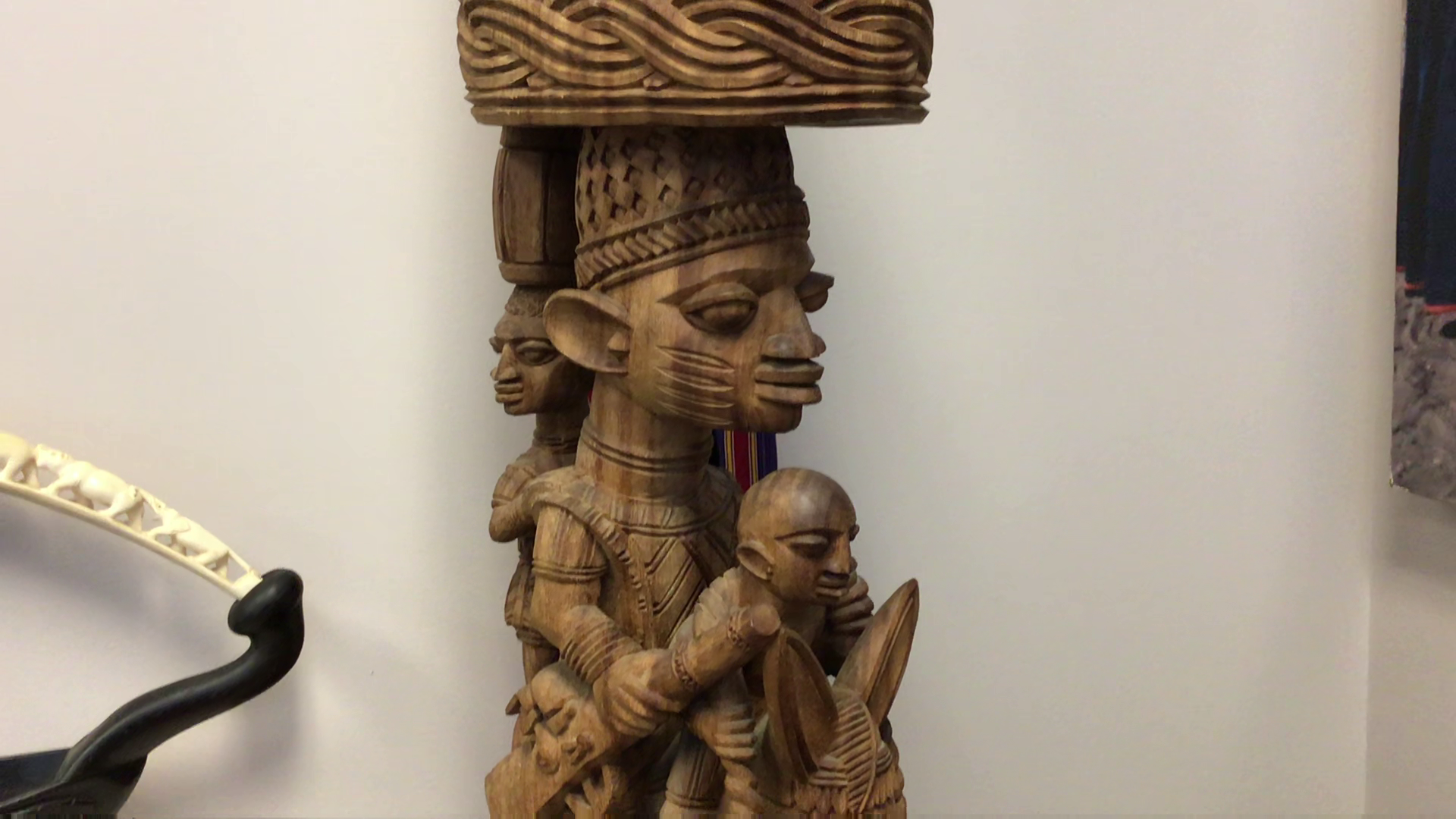 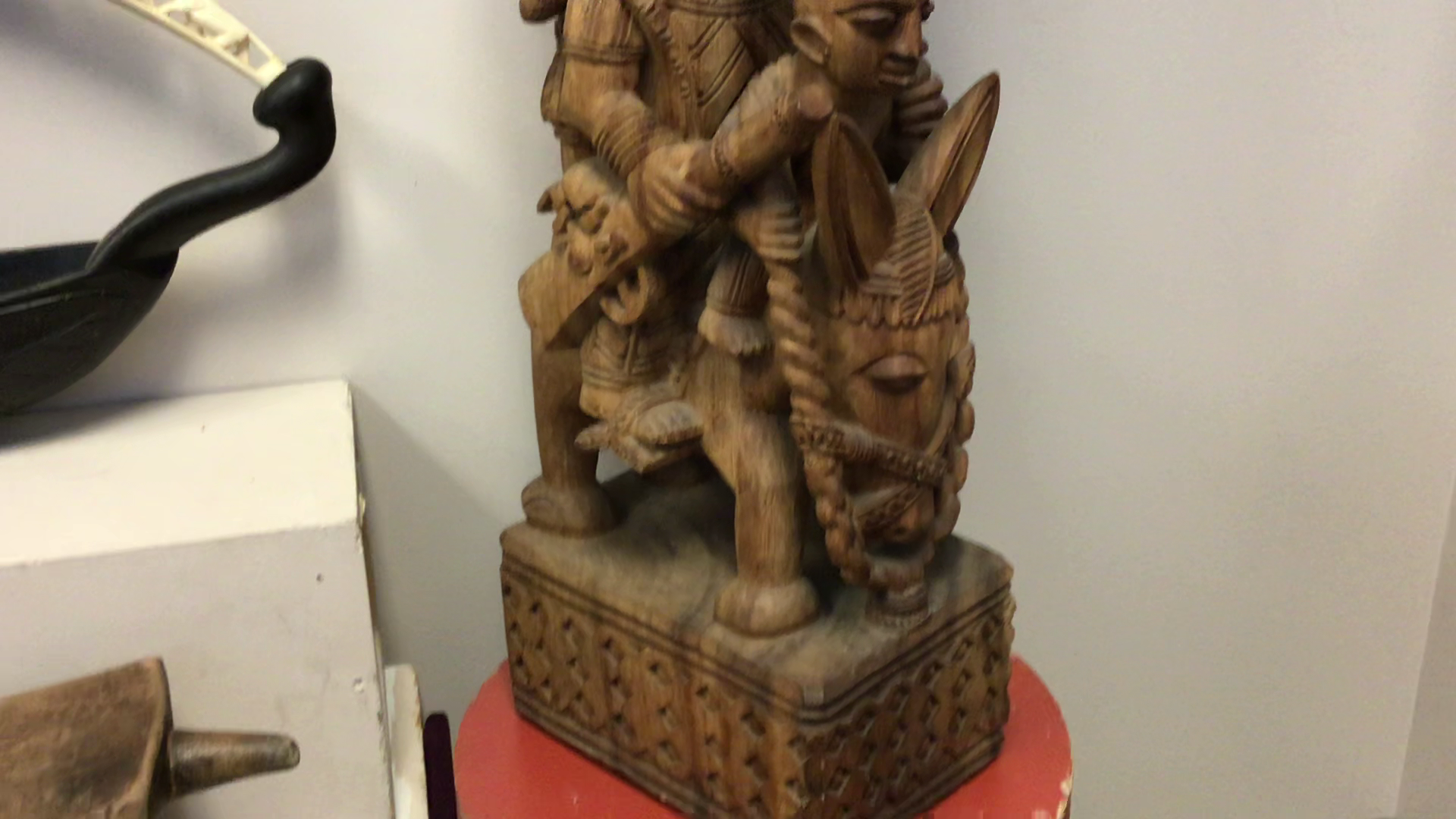